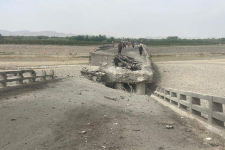 The Picture depicts a bridge destroyed by the Taliban in Afghanistan in the Kandahar province in March 2021 (taken from https://ariananews.af/taliban-destroys-a-bridge-in-kandahar-moi/).

The situation in Afghanistan is worthy of analysis from an Intercultural perspective, at least to learn something from it for the future, or even to add to the creation of a more compelling common future together.

Taliban in Pashto means Students (borrowed from the singular student in Arabic طالب) and the fundamentalist group was founded in the 1990s by Mullah Omar and his students that wanted to get rid of the corrupted and terrorizing Mujahideen warlords. Wikipedia has a lot of information on this, and it is worthy to give it a read. The main idea is that the Students (Taliban) grouped around an initial (accepted) positive purpose, under the welcoming and support of some western leaders that didn’t understand how the Cultural values work, and how they can backfire if fueled for secondary purposes, like fighting communism.

There are several things to observe currently:

The real Expertise on Cultural Differences is the most useful when the situation is unclear, vague, and under pressure, because an expert can give you practical variants to proceed further (versus the traditional use of InterCultural knowledge to explain past events through a particular framework). The more details are available, the more precise the variants to proceed further can be offered by the expert on the fundamental Differences between Cultures.

Imagine a world in which the Taliban and the Human Rights Watch shake hands and both sides are genuinely happy!

Purpose of the project: To identify how to save the Country branch from Bankruptcy with a minimum of investment and by reallocating resources correctly.

In a world of multinational companies where teams mix together in different ways, the value of an expert in how to deal with cultural differences is undisputed. George proved to be a professional who is not just looking for quick fixes or treat a "symptom" in your company. He is genuinely interested in getting to know your team so he can personalize the instruments he is using to your cultural reality and really make a difference.