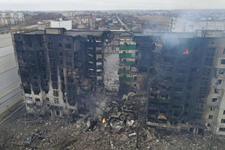 Before reading this article, please check the index your country has on Freedom of speech: https://rsf.org/en/ranking This will help you understand if you get enough information with many sides of the story or just the convenient version of your local politicians.

There are two things further that will influence how you see the situation in Ukraine: 1. your desire to become an Oligarch (or a Very Rich person owning several businesses or countries) and 2. your mentality and cultural education.

From an oligarchic point of view, all things revolve around power and money. You give and take countries. You split the world and decide that some humans should live in a way while others in a different way. Some humans should express their opinions while others should obey their “presidents” or their new “presidents” that have decided that their land and lives belong to them in this new split of the world. An oligarch also owns several media outlets and pushes their needed information in order to influence the people that are not taking part in the split of the world (but are split), and that will gladly kill others or get killed for a little more money, from the fear of repercussions or for an ideal that might have expired in these modern times.

We will not be able to influence the oligarchs so I’m not going to waste time with that small group.

The most interesting thing is that humans that are not in oligarchic positions gladly accept that the world should be split and some oligarchs should take some part while others another part, and ideally the split shouldn’t influence them. It is understandable why gospodin putin in his mental sickness wants to go back to the old “split of the world”, but it is really mind-blowing that humans that live poorly or in areas of conflict accept that Ukraine and the Ukrainians should be treated like an object with no will of their own and be “transferred” to Russia, whatever the reasons. This mind-blowing thing happens because of three things:

So, what is happening in Ukraine?

Due to the fact that for several centuries now Empires are not the best form of organization for humans, the USSR didn’t have the cultural structure to adapt to this reality while also maintaining a healthy connection between the nations that were inside of it so it has also collapsed. There are several political systems that allow several different nations to live together but the USSR (and russia now) are not among these systems. Ukraine took its own path in 1991 and with all of their imperfect politicians, they have progressed towards a more participative system, moving away from an oppressive one.

By February 2014 the Ukrainians’ will was so strong that gospodin yanukovich decided to run away to russia leaving the country in a big economic hole. It was at this moment when the “green military men” in unmarked uniforms started to appear in Crimea claiming that they are the “self-defense against the fascist government in Kyiv”. It is claimed that russia used “project managers” from the Wagner consultancy (a paramilitary russian group that does the dirty job of gospodin putin in various countries in the world). By the way, russia is present in all the countries in the world through its media outlets and some of the local corrupt politicians. Where they are not present, they come in with Wagner. Coming back to Crimea, they organized a “referendum” in which the result was 96% in favor for the russian annexation although in Crimea there were 13% Crimean Tatars that have returned as of the 1980s after being deported by gospodin stalin to Siberia in the 1950s. It is doubtful that at least these Tatars would have wanted to go back to russia and might have voted for the annexation. By the 15th of March, Crimea was annexed and gospodin putin issued a commemorative coin with the 21st of February on it and admitted that the “green men” were actually the russian army. The very interesting thing is that nobody in Donbas was bothered by the new government in Kyiv until April 2014 when the Wagner “project manager” moved from Crimea to Donbas and managed to create the disturbance that they called a “civil war”. I personally have met separatist Ukrainians, that unfortunately were lacking the proper education on what a Democracy is or what a Country without corruption could look like, or why would the government in Kyiv be “fascist”, so their lack of education made them susceptible to the russian propaganda’s manipulation. However, there was enough evidence that russia sent military equipment to Donbas (including the BUK system that took down the MH17).

Now, in March 2022, there is a guerilla war ongoing with the Ukrainian population fighting back, even with bare hands, blocking the tanks without having guns, but also attacking with cocktail Molotovs. (As a parenthesis, do you know why those are called cocktail Molotovs and not cocktail Ribentrops? It’s because of the Finns. When Finland was invaded in Nov 1939, Russia under stalin and molotov claimed that they are sending food to the “poor Finns” while they were actually bombing Helsinki, so the Finns created these “cocktails” to send them back to the “generous russians” and gave them the name accordingly.)

The russians were bombing and shelling residential buildings in all of these cities knowingly to decrease the morale of the Ukrainians. It is NOT a ONE MAN war. The individual russians taking part in this GENOCIDE know what they are doing.

After some of the negotiations between the russians and the Ukrainians, the russians bombed one of the agreed human corridors killing a Ukrainian family. It is said that the russians have orders to kill the Ukrainian population to punish them and to ensure that they will be able to control the newly occupied territory easier. Hopefully this Genocide will not go unnoticed, similarly to the other ones from the past 150 years that are still not acknowledged by russia.

I have left Ukraine on the 24th of February after the first bombings and there are very few chances that my friends that stayed there in Kyiv, Irpin, Bucha, Kherson, Kharkiv, Chernihiv, are lying to me or are part of an extraordinary organization that is painting the buildings as being bombed just to make “russia look bad”.

Next time you decide to defend russia or to believe that we need a balanced approach to this “conflict” or “military operation” remember that you are supporting this GENOCIDE. Ukraine is not an American project and it is neither a russian object, in the same way in which your country shouldn’t be any of this. If you need my insights into how your country is YOURS (if you’re not an oligarch) I can highlight for you the cultural aspects that need to be addressed in order for peace and prosperity to happen in your country with its neighbors.

The russian invasion of Ukraine is punished so harshly economically by many countries in the world because there was absolutely no provocation from the Ukrainian side, with the exception that Ukraine was becoming successful on its own.

Improve the collaboration for an Energy holding

Purpose of the project: To improve the communication and collaboration between units in order to support the further planned expansion

George worked for us on a project on diagnosing the Organizational culture in our extended leadership team, using their researched instrument. Our main purpose was to identify whether there was something that could be done to drive the Leadership team to the next level, and whether there were any aspects of our current way of working that were hindering us. From the results of the evaluation we’ve got several points that made things clearer and we could take actions to drive the evolution of our leadership team. I’m looking forward to working with George on a future project.