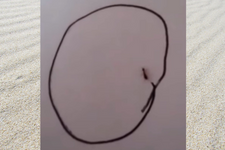 Have you watched this video of “Limits existing only on Paper”?

I’ve been shown this video several times by various trainers or managers with the purpose of conveying that “Everything is possible and limits are only on paper”, or more precisely, that What they desire is possible.

While the mindset of “Everything is possible” is quite an energizing one, transmitting this logan without Empathy makes it ignorant and just another way of pushing people to do what the manager wants them to do disregarding their ways of being.

Let’s rewind a little to explain the video. For an ant, it is tormenting to feel ink around it, and it is painful to step through ink, because, well, the ants use smell as their way to guide themselves, to communicate, and to collaborate, in the so inspiring way for humans sometimes. Just to make a parallel, imagine that a human would be surrounded by a trench of lava, and a superior creature that is not affected by the 700 to 1200 Celsius degrees (2000 Fahrenheit) would laugh that the poor human can not just cross the lava trench, not to mention the ignorance of the superior creature about not feeling the pain of the heat even from 1-2 meters away.

If we can not develop the Empathy to feel the pain or torment of a living being that is much simpler than a human, and understand its limitations together with understanding its superiority in some aspects (see the video below), we can not expect to understand the torment of other fellow humans that are coming from other groups, that have other needs, that have developed other mechanisms (and traditions) to survive as a group, because “their limits are just on paper”, or “we as a group have overcome their limitations long ago, so how come they can’t?”, and “why don’t they understand that we are all struggling and that our struggle is more important?”.

Cross-cultural training is mostly understood as training across different nationalities, which is a good step forward, but Culture is much more than Nationality. Culture can explain the group behavior of any group of humans, if in an organization, their Corporate Culture, if in a department, their Functional sub-Culture, if from a Region, their Regional Culture, and it is needless to say that Culture applies to any of the Axes of Diversity, and it is the most important element when driving Inclusion across the existing and accepted Diversity.

Paramount for driving a constructive Inclusion, which means more efficient Communication and Collaboration across Cultures (be those National, or on other Axes of Diversity) is the correct use of the concept of Empathy (not Sympathy). Empathy is that skill that a Cross-Cultural trainer or a Change agent develops in order to feel the pain and the joy of humans that have evolved as a group under different circumstances, with different needs, and with different aspirations, and uses that skill to translate the pain and joy of humans from other groups, most of the times fueled by things that are in opposition.

Of course, expressing these differences requires a certain amount of symbols and tendencies, but the biggest trap is when the symbols become everything and then a whole group is boxed in a stereotypical unconstructive manner.

National Culture is the easiest Axis of Diversity to be bridged, as complex as that is, but it is a start. There is no 2nd Earth, and we will have to learn to live with each other, with the limited resources that we have and without trying to impose our group survival mechanisms on other groups that operate on opposite realities. Facts are facts, but Perception is ALWAYS more important.

If you are passionate about creating an Inclusive environment in your Organization, check out the opportunity below. If you just want to drive more collaboration across cultures, maybe a workshop on cultural differences might be a safe step forward.

An Innovative mentality in Automotive

Thx for [the webinar], your time, and your perspectives. There is definitely a lot of complex information there that was a bit overwhelming for me at first. In the beginning, I thought what is this system and how do I use or apply it to me??

But, as you went through the material and applied it to our situations it began to make sense. With your calm guidance, it helped to give me some major missing puzzle pieces that I hope to now be able to integrate as I navigate some major life changes.

It’s funny when I most need it, a messenger appears with an important message at exactly the right time. It has always been this way as long as I remain open to receiving the message.