Vaccines, Xenophobia and the Sentinelese 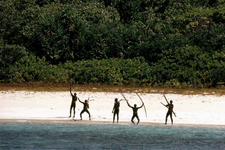 Xenophobia is defined as the “dislike of or prejudices against people from other countries”, and in general it is considered as something undesirable that we should move away from in the interconnected world we are living in currently. Modern Xenophobia creates unnecessary frictions between groups, and these frictions are taken advantage of by the populistic or nationalistic politicians for their own individual benefits, while in reality, the external environment has evolved to such an extent that it enabled various wise societies to deal with these differences in a much more constructive manner overcoming Xenophobia’s biggest undesirable tendency – War.

The Sentinelese are a tribe living on the Northern Sentinelese island, in the Gulf of Bengal (East of India), and what is interesting about them is the fact that they are one of the tribes on the planet that did not accept so far broad contact with other humans, including with the humans from the tribes from the neighboring islands. Another interesting thing about them (from the brief interactions that took place so far with the various fishermen or with the various attempted anthropological expeditions) is the fact that, aside from hostility (showed with their arrows or by them hiding away), they can convey in an understandable manner that they are patronizing the failed attempt to establish contact (with laughter or offensive gestures) so it is a conscious choice for them to stay isolated.

The number of humans in this tribe is not big (50 to 200 maybe), and by no means should they be considered a threat to the other humans outside of their island and the corresponding water surrounding it, but their existence allows us to analyze existential difficulties our societies are dealing with in the present. In the late 1880s in one of the expeditions that took place on their island, 6 of these humans were captured and transported to the mainland, all of them falling ill very fast and the two adults died (due to their lack of antibodies to the viruses existing then) while the 4 children were immediately returned to the island sick as they were. It can be assumed that it is because of the illness introduced with the four sick children, that the Sentinelese maintained their desire to stay isolated and have developed such a strong defense mechanism against humans from the outside. In a nutshell, they have developed Xenophobia as a real defense mechanism against being wiped out from their existence by the illnesses introduced by other humans.

150 years is nothing in the evolution of the human species, but it is very important in the development of various cultures and we can accept that various societies evolve in different ways in their own environments. Each trauma impacts the way the group ensures their survival further and most of these practices become part of their dogmas, traditions, and states of affairs those humans will put value on unconsciously, transmitting them further from generation to generation. The Sentinelese could be an acceptable example of the positive reason behind Xenophobia. This could also allow us to analyze rationally why humans from some particular societies might have developed a more inclination to be Xenophobic, most of the time not even being conscious of the “educated” defense mechanism and the traumas that have put in place these defense mechanisms centuries ago. At the same time, they might not understand that maybe the past “danger” is gone and the external environment has improved so much that safe constructive adaptation is available and possible.

Another reasoning we could make by knowing about the existence of the Sentinelese is the fact that in their particular case probably the Vaccines would be too dangerous. Because their number is so low, the risk of destroying the entire tribe is very high and it is not really known which antibodies they currently have and how they would react to even the simplest vaccine. As a brief history of vaccines, the vaccines were developed as a way of ensuring the survival of a society in the face of the various pandemics. A Chinese emperor used smallpox “inoculation” in the 1500s in order to develop the human body of his people to face the disease in a controlled way (some writings state that virus “inoculation” was used even since 200 BC). The inoculation was done with the alive virus and the risk of death of 3% of the population was still considered better than allowing chance to dictate how the disease will impact the society. Since then, the unperfect vaccines have evolved and they will evolve further continuously decreasing the % risk. Trusting a group of fellow humans that have a particular education, which have dedicated decades of their lives to studying viruses and the human body, and which are constantly checked by another group of fellow humans, and further need to receive special approval from another group of fellow humans in order to deploy a vaccine, well, trusting all of these humans is a very “human” thing and it is the “aspect” that differentiates us from the other apes that don’t trust each other unless they’ve met. (as primitive and as ignorant I might have simplified the much more complex process of developing a medical improvement).

The primitive blockage to this Trust is Xenophobia with its main tool – war, and this, in the modern societies, has transformed into other undesirable group-divisive tendencies like racism, chauvinism, sexism, and others. A new development that started to take a stronger shape in the past two decades, influenced by the development of the virtual social networks, is the cohesiveness of the various groups around “conspiracy theories”. This is just another natural group tendency, which if understood, can be dealt with in the most constructive manner for all sides, keeping a good balance between safety and protection on one hand, and maintaining the recent positive societal developments on the other hand.

Coming back to the Sentinelese, we can accept that their Xenophobia is a real defense mechanism ensuring their survival, and we could also estimate that for them probably the current Vaccines would be too dangerous as they have developed their bodies in separation from the other humans at least for the past 150 years, and their low number of individuals in the tribe doesn’t justify taking the risk for the sake of uniformization.

One last thing we could appreciate is the wisdom of the Indian government which in 1956 officially granted the Sentinelese isolation and declared their island a tribal reserve, prohibiting outside travel within 3 nautical miles around it.

The existence of the Sentinelese with the brief knowledge we have about them can enable us to evaluate our own societal dilemmas. While for the individual Sentinelese some options are not available anymore, for the majority of the other humans these are. A modern society will survive a pandemic for sure, but an individual human might not.