What could be the similarity between Parenting and Working Across cultures? one might ask.

The similarity comes from the similarly high levels of frustration one experiences during the two types of interactions, only, I would say, the level is much higher when “negotiating” with your toddlers because you don’t have the option of dropping the deal. You have to survive it, drive it towards the long term constructive realms, while having less and less control, and ideally enjoy the process (all of it).

For the past 5 years, in my role as a parent, I started to be more and more aware of “my buttons” and I was surprised that my (now) 5-year-old son found them much faster than me in my whole life (nothing personal, and for sure not done on purpose). I’ve also noticed that when he screams or cries because something external and unexpected happened to him, no matter how tough of a day I had, I always find the resources to comfort him. But, when something that I don’t consider important (or more correctly that I don’t understand) disturbs him, and he expresses his emotions (anxiety, desolation, anger, disappointment, etc) with the same energy, all of my goodwill is drained in a matter of minutes and I’m starting to be overwhelmed by the traditional Fight or Flight reptilian reaction (a louder voice or a walk away, in most of my cases).

(a brief practical table with real stories can be found at the end of this article.)

Being a Practitioner on Cultural Differences, I could recognize that the feelings triggered by the “negotiations” with my 5-year-old, as well as the feelings triggered by the negotiations my friends have with their toddlers, are very similar to the reactions people have when they work under pressure in other cultures and they don’t understand the behaviors of the people they interact with. It is a fact that the biggest conflicts across cultures happen when we do our best to show and offer to the other side what is important to us, only to find out that we have offended them, or that their answer was offensive to us, triggering our Disappointment, Distrust, Anger, the holding of the Grudges, or other undesirable and unconstructive feelings. Understanding the other side’s way of perceiving the world will allow us at least to not get offended, to hold on to our energy in tough situations, and, when we’re at the expert level in this field, to even enjoy the novelty of the situation and make the best out of the interaction in the most comfortable manner for all sides. Saving a situation by saying the right thing, by bringing light on the unnoticed misunderstanding, and by doing the right thing, is a precious skill in this current business world.

One of the biggest values that a Practitioner on Cultural Differences brings to their partners is the possibility to find new meaning for apparently common behaviors, based on the different cultural context, and to sketch several possible next steps in order to unlock the situation and drive it towards a constructive realm. Teaching when to drink tea in a different culture should be left to Wikipedia or to travelers, but not to Practitioners on Cultural Differences.

Coming back to Parenting, I thought of applying this technique of finding an unusual but workable meaning for several “tough negotiations” with toddlers that I have seen so far as a parent or as a friend of other young parents, just to decrease the amount of frustration a Parent might feel in a similar situation. Of course, the Personality of the toddler matters a lot, so the interpretation is not universal, but I’m not going to dive into details on Personality, because that is already nicely structured and addressed in many parenting books. I’ll stay away also from giving advice, or how the majority of the parents feel it: “annoying advice”, which is what you get from a bystander during one of your kids’ meltdowns; a bystander that didn’t spend at least one crisis hour with the toddler and thinks that their “method” is universal. The advice coming from a non-parent is always the funniest, as it proves humans at particular levels in their development have no idea what’s coming up next (and we’ve all been there).

So, in the table below I have captured three “translations” of “unreasonable behaviors” of toddlers, in order to enable some Parents to exercise more self-control over the Fight or Flight tendency (with the guilt that comes afterward). By using such translations, we, as parents, have the option of channeling our energy better and enable the option of creating long term friendships with the humans that are now just our children. (I know that I am culturally biased here in my wishes, and that’s ok.)

Of course, the situations can have many other “translations” because the Personality of the toddler matters a lot here.

There is another thing that matters in these interactions, and that is the Culture. The Culture of the parent, which we are unconsciously transmitting to our children, and which just by understanding, can be used to solve half of the problem.

If you want to stay updated regarding such articles, Subscribe below to our Newsletter!

Let’s take an example: in some cultures, a parent might think that just because they are older (than the child, obviously), just because they have the money, the house, the car, and because they are providing the food, they are higher in the hierarchy and that this fact is accepted by default by both sides (by the child too). Apparently, this is not correct, but it is very emotional on the Parent’s side.  This acceptance of the hierarchy actually takes years to be achieved and unfortunately not always the parent gets to reap the benefits. Sometimes by the time this is achieved, a boss will get the benefit, or a company, or the society at large, at the expense of the newly formed young individual. There is a chance that in the child’s mind, you as a parent are just like an experienced friend, to which they don’t owe anything (yet), and that just helps them discover the world, and by some miraculous way takes care (sometimes) of whatever they are missing while they are developing. This makes things more complex, because of course, we shouldn’t grant every wish the child has, and moreover we should slowly remove our support in order to let them be independent individuals. The differences in the moment various types of support are removed from the children in different cultures, create part of the profound cultural differences.

Just to clarify, I’m not saying that establishing hierarchy is all bad. It has its benefits in creating a more predictable society, and for sure in the past, it was very useful, as it created more dependability and more certainty when there were many uncertain things happening all the times (like wars, or diseases, to mention just two big ones). Nowadays with the technological advancement and by looking at the newly formed young adult generations and their struggles, we can see that educating hierarchy in them might not be the most important thing.
Related to hierarchy another Cultural bias appears, and that is the tendency for the parent to feel that they are being “weak” or being perceived “weak” because their children “dare” to challenge them or not listen to them. Just by knowing that there are very successful cultures in which that is not seen as a weakness, might release some of that inner tension, and enable the parent to not give in to the Fight or Flight culturally protective mechanism.
This doesn’t mean that it is constructive to let the child do whatever they want. Not at all. There are other ways of keeping a sane level of control over your life and schedule with several of these “unreasonable negotiators” by your side, and one could be the education of how consequences work. “We agreed that the bedtime is at 9:00 pm, and in case you don’t go to bed at that hour regardless of how much I ask you to, I will not get angry, but the next evening, you will not get the tablet, (or if possible something that doesn’t need to backfire on the parent as well).” And when the next evening comes, the promise is kept: “I can understand that you are very upset now, because you really want the tablet, but I have reminded you yesterday several times that by not going to bed on time, this is what was going to happen. This is called a consequence. Come here so that I comfort you while you scream for the next 30 minutes; or, I’ll stay a bit further so that you can’t hit me, but know that I am here, not leaving you alone with these terrible feelings you must be experiencing now.” Such an exercise requires a lot of preparation and a lot of energy, but applied once or twice in the course of a few months, does wonders. One remark here is that “Safety comes first”, so depending on the personality of the child, the reaction might need even more involvement from the parent in protecting the child, themselves, and the objects around.

Another thing that we value (in some cultures) and that gets challenged by our toddlers, requiring us to take conscious decisions towards the benefit of our children, is our anxiety regarding wasting resources (wasting too much time on something we are used to doing very fast, wasting a newly bought toy that gets destroyed right away, wasting some of the good things in the house, etc). Inclining the balance towards the good development of our future “best friends” could enable us to give in less to our natural instinct of “Fight or Flight” that might potentially teach them that they are not accepted the way they are.

We are preparing our children for a future of which we can see only glimpses, now more than ever before, because of the speed of technological developments. Still, no matter what life will have in plan for them, there is a chance that helping our children deal better with their Anxiety and Anger will help them a little more than teaching them at all costs to keep their rooms clean, to obey orders, to eat everything, or to do most of the things at least at the proficiency level we did them after tens of years of practice. We have the possibility now to help our children understand themselves better than we have ever done ourselves and make the best of whoever they are. 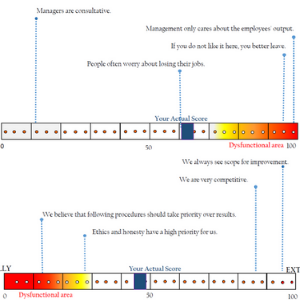 There is too much micromanagement and the people are overly stressed (maybe it is an adverse reaction to something working badly).

George helped us with evaluating the Organizational Culture in our recently restructured department, and the results were very helpful because we could see how far we've reached after we've implemented the changes. We were also able to identify the things that we did very well, and the things that needed to be further adjusted or conveyed in a different manner to our professionals. Based on the diagnosis, we could adjust our action plan and stream forward towards achieving the business goals we've set ourselves to achieve. I'm recommending George and his tools to anyone that needs clarity and alignment, and needs that in a fast and reliable manner.